Here in the area in and near Port Townsend we are well and truly blessed with one of the best maritime climates anywhere. The Olympic Peninsula’s spectacularly rugged interior provides us with another extraordinary benefit — the rain shadow that brings a lot more sun than the Pacific Northwest’s rainy reputation would have you believe. Port Townsend averages around eighteen inches of rain per year, while some western portions of the Olympic Peninsula are soaked with more than two hundred inches of the wet stuff!

Are you tired of dealing with feet of snow in the wintertime? You won’t need a snowblower here, and we don’t even have a snow shovel at our house. If you like winter sports, though, you can be skiing or snowshoeing only a short drive into the mountains. Our maritime climate also means that you r heating bills are lower than you may be used to. Summers are mild enough that you won’t need central air conditioning in your home. Just opening a few windows will keep you comfy.

Yes, the Pacific Northwest has a well-deserved reputation for being a wet place, and least west of the Cascade Ridge . . . there are exceptions to the rule, though. Sitting here on the northeast corner of the Olympic Peninsula, we are protected from many dreary days by our rain shadow.

When storms move in from the Pacific Ocean and make landfall on the western side of the Olympic Peninsula, the Olympic Mountains are the first obstacle they face. The clouds are pushed up the slopes, moving into colder air as they go. The dropping temperatures precipitate moisture out of the clouds as rain and/or snow, depending on the time of year. By the time the clouds make it over the high peaks of the Olympics, they are carrying a lot less water than they were closer to sea level. A storm will often lose so much moisture that its clouds will dissipate on the lee side of the ridge, and the sun breaks through.

There are many pilots who chose our area as their home, because as they approach airports around the region on a stormy day they break into clear air with Port Townsend shining below them. Minutes later they are back into weather as they set up their final approach in the rain.

A picture can speak louder than words, so here’s a precipitation map for your enjoyment. If you click here, a browser tab or window will open with a larger version that you can save to your computer. Print a copy to look at from time to time and think about why you should be living here, too! 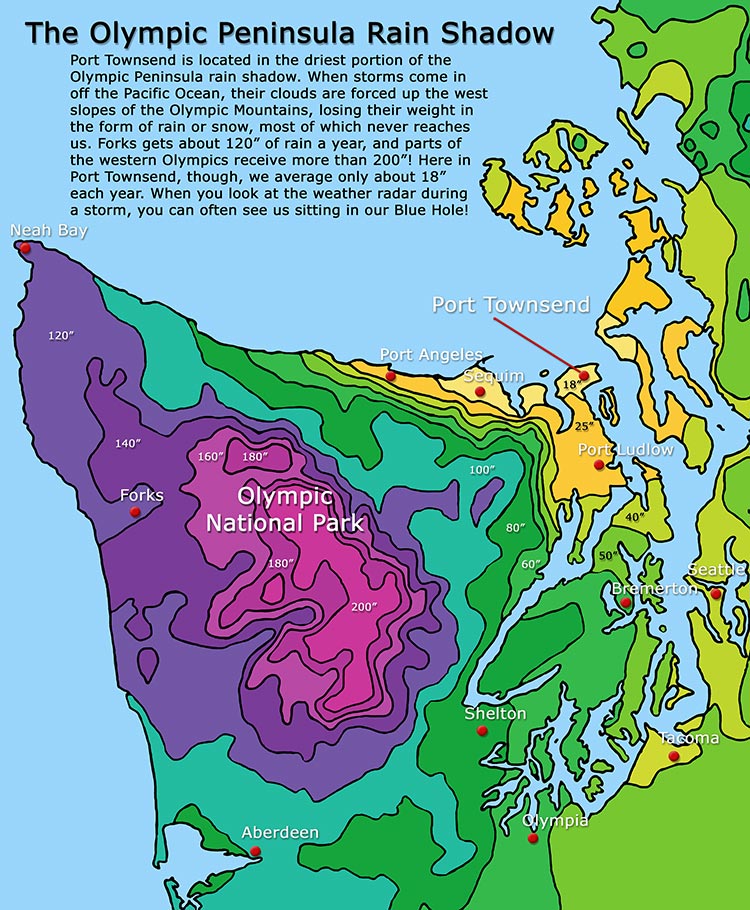